Welcome to Captain Lester S. Wass Post 3 of the American Legion located at 8 Washington Street, Gloucester, MA. This site was created so our members, families and friends can easily access important information about our Post .

Saturday and Sunday from 12-9PM. 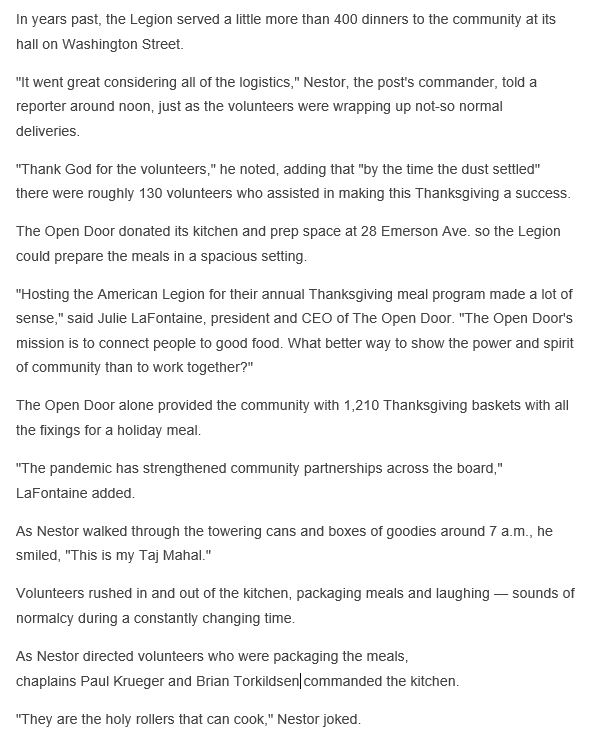 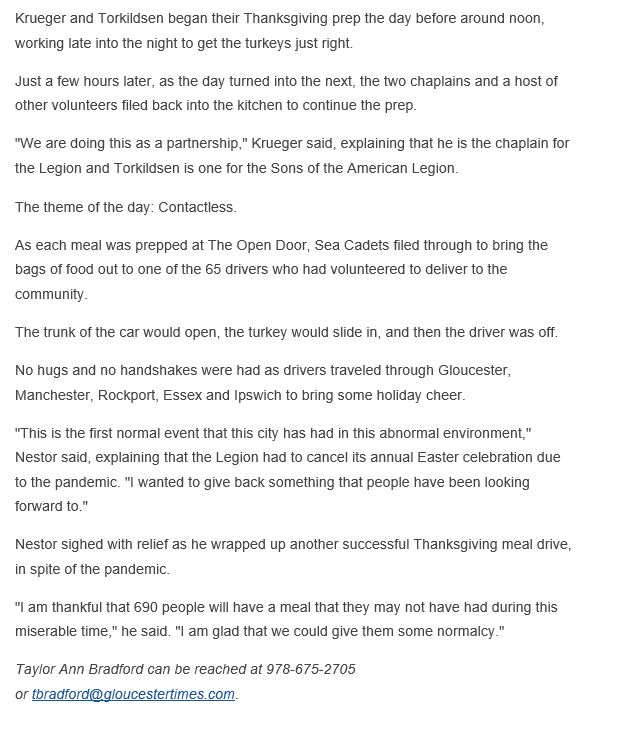 Letters to the editor A promise to be kept

On Nov. 11, this nation honors its veterans on Veterans Day. Unlike Memorial Day, where we join together to remember and pay a lasting tribute to those men and women of the armed services who have made the ultimate sacrifice in the defense of their country, we set aside Veterans Day to thank and honor our living veterans and all that they have done for this country.

But there is still something missing. In previous years our local and state leaders stood before us and pledged to address the shortage of affordable veterans housing in Gloucester, especially for older veterans. Unfortunately, year after year it hasn’t happened despite good intentions. A shortage that is growing even more critical as my fellow Vietnam veterans have entered the ranks of “senior citizens.”

Sadly, there has been no significant housing in Gloucester dedicated to veterans since the initial construction of Poplar Park in the early 1950’s. But even that only lasted a short while and is now just affordable housing and ceased being for veterans well before the Vietnam War. This was a war that was fought by hundreds of young men from Gloucester in a conflict that bitterly divided this nation. For decades the citizens of this country could not differentiate between the warriors and the war, and the miserable treatment of my fellow Vietnam veterans by this country upon their return is well documented.

Fortunately, the tide of opinion has finally changed. There are the names of the 11 young men that are engraved on the Vietnam Veterans Memorial that lies in the shadow of Gloucester High School who answered the call of their country and made the ultimate sacrifice leaving behind grief-stricken families who mourn their loss to this day. Many of those who did return were never the same. The phrase “Some gave all and all gave some” is extremely relevant to my generation.

But as we enter this decade, we are getting old. As noted above, we are now the “senior citizen veterans.” When we read the list of recently deceased veterans during the Memorial Day ceremony, the majority are now from the Vietnam War era. Yet many of the survivors are struggling to live on Social Security or VA disability payments. Housing is often at a premium and out of their price range, or they have to sacrifice other “extras” such as food or medicine. They deserve better. My generation should not be forced to struggle to find affordable housing, we have already paid too high a price for our country.

But there may be a ray of hope on the horizon. The North Shore YMCA, under the leadership of President and CEO Christopher Lovasco, has submitted a proposal to the city seeking to demolish the existing YMCA Building at 71 Middle St. and construct 44 one-bedroom senior affordable housing units on the site. I would support their proposal. What I would seek is that 20% of those units be designated as “veterans preference” senior affordable housing. The North Shore Y would send a very loud and convincing message

that not only does the Y support the youth of our great city, but also its veterans.

Thankfully, Mr. Lovasco has been very supportive of the concept of veterans housing but the YMCA would need some financial assistance from the city, state and/or the federal government to aid in the financing of these veterans’ units. I am calling on the Mayor Sefatia Romeo Theken, state Rep. Ann Margaret Ferrante, state Sen. Bruce Tarr and Congressman Seth Moulton, all strong advocates for veterans, to work with North Shore Mr. Lovasco to identify and obtain the required funding.

I salute the Y for considering this proposal but we need to do more than just consider, we must make it happen. Our veterans deserve no less.

I would ask that all citizens of Gloucester strongly and loudly signal their support for this proposal and to reach out to our elected officials to insure that this funding is speedily obtained. We cannot let another year pass with no relief in sight.

On this Veterans Day I think that it would be a tremendous opportunity for both the Y and the veterans of Gloucester if this can happen, and now. While the Veterans Day ceremony is a remembrance of our living veterans and the sacrifices that they made in defense of this country and city, creating affordable senior veterans housing is a much more tangible and long term expression of gratitude. Please do not disappoint. We must keep that promise. We must always remember, they are your fellow citizens of Gloucester! They were there for you, now you must be there for them. We need to affirmatively reach out and support them. We need these men and women to understand that we understand! They are rights that they are entitled to for their sacrifice and hardship.

Let us make this Veterans Day a new day with renewed efforts. Let us insure that all veterans know that the sacrifices that they made in defense of their country are not ignored. We understand, we support, and we care.

Saturday and Sunday from 12-9PM.