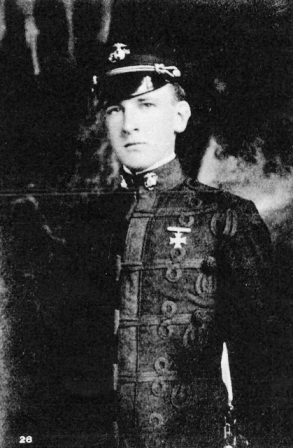 Lester Sherwood Wass was born in Gloucester, MA on June 25, 1886. He was appointed a Second Lieutenant of Marines on May 14, 1909. Following completion of Marine Officer’s School at Port Royal, SC he served at Marine Barracks, Portsmouth, NH. Subsequently he served with the First Brigade Marines at Cavite, P.I. and other stations in the P.I. From April, 1910. He had further service abroad among other places including Shanghai, Taku and Pekin. He was back at Portsmouth on July 1, 1913. He was ashore in the Mexican Campaign at Vera Cruz from April until November, 1914. On January 8, 1915 he landed at Port-au-Prince, Haiti. On January 12, 1916 he landed at Santo Domingo City, Santo Domingo with the 22nd Co, 1st Regt. and later with the 2nd Brigade. He was promoted to First Lieutenant with DOR of June 12, 1916. He was detached from that service and arrived at Quantico on June 10, 1917. He had been promoted to Captain April 26, 1917 w/ DOR August 29, 1916. He joined the 5th Marines for foreign shore service in France, August 22, 1917 in command of the 18th (E) Company, 2nd Battalion under LtCol F. M. “Fritz” Wise USMC.

In combat at Chateau Thierry and in the Bois de Belleau in June and later at Soissons and Vierzy in July, he distinguished himself and was posthumously awarded the Distinguished Service Cross and later the Navy Cross as well as receiving four silver star citations. He was seriously wounded at Vierzy at the head of his troops on July 18, 1918 and died the following day. He is buried in France at the Oise-Aisne American Cemetery, Plot D, Row 16, Grave 12.

Citation:
The Distinguished Service Cross (#5624) is presented to Lester S. Wass, Captain, U.S. Marine Corps, for extraordinary heroism in action in Bois-de-Belleau, June 11, 1918, and near Vierzy, France, July 18, 1918. In the Bois-de-Belleau, when all the officers of his company had become casualties, Captain Wass displayed marked heroism in leading his men forward in the face of heavy machine-gun fire, assisting in the capture of many machine-guns. Near Vierzy he fearlessly exposed himself to enemy machine-gun and artillery fire, directing personally the reduction of strong points. He was killed at the head of his men, while leading an advance. General Orders 71, W.D., 1919

Second Division Citation:
“Displayed unusual heroism, courage, coolness and utter disregard of personal danger under trying circumstances, northeast of VIERZY on July 18, 1918. During the second attack launched against the enemy by the second battalion, and while Captain Wass was personally directing the reduction of a machine gun nest, fearlessly exposed himself to its deadly fire, six friendly tanks which had been supporting the French on left returned through our lines bringing with them a murderous concentration of artillery fire. Controlled, as it was, by a low flying aeroplane this soon destroyed four of the six tanks. With the most wonderful nonchalance, and utter disregard of the bursting shells, surrounding him, Captain Wass went along the battle torn line calming the excited, and reassuring the faint heart. By his superb bravery he kept his line intact, and moved toward the enemy with a cane swinging easily in his hand.”